skip to main | skip to sidebar

1)"“To what extent are we already experiencing a man -machine symbiosis that has turned us into cyborgs [or posthuman bodies]?” Christiane Paul (Digital Art, p 166)

When you simply look at one person who is wearing glasses, you can realise how have we been experiencing a man-machine symbiosis. Another example is like those who want to own an attractive body's line, they would choose to wear a case in certain shape for a long term to help improve the body line. Also, the disabled people would use wheel chair or some kind of externally mechanical legs to support their steps when they walk.
These man-machine symbiosis appears generally and commonly in our society.People rely on machine and it is gradually not easy to seperate them. I believe we have already experience a man-machine symbiosis in a high extent.

2. What are some pros and cons of becoming a cyborg? 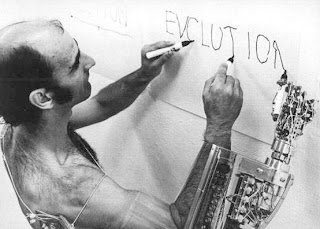 Pros:
Frankly speaking, machine like mobile phone, glasses even the prosthetic-fake arms etc., helps human a lot in terms of increasing convenience in tackling problems in daily life. It, in a certain extent, reduces our use of time as, lets say, there can be three hands doing things concurrently. It also allows human to do something they are not used to do because of its hazard and danger.
Cons:
Being too addicted in using mechine, human becomes dependent.
Out cells and organs may no longer adapt to the condition once the machine is abandoned.
Human body's function become worse and worse.
The attachment may harm our body once the connection between human and machine is handled badly.

3.What do you think of Stelarc’s work?

After I have seen his work, prosthetic fake arms, the first impression araised in my mind is that it looks like a character in the film (Spiderman) called doc_ock. He is a scientist and professor. He has invented a prosthetic arms which is able to be attached to human's back bone. It functions as people's another pairs of arms. At the end of the film, he realised his failure of electronic terchnique which has led to his death. 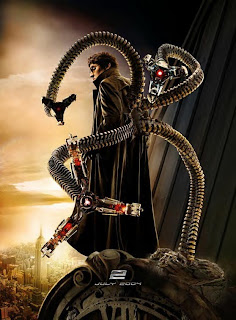 Stelarc's work totally gives me this sense of terror and horror. It disobeys the natural law of human structure. Especially for the work (so-called work of art) in which a third ear in grafted onto his forearm, it is extremely disgusting. Organ is in a wrong possition, but the artist even the public says that it is a work representing contemporary art media. Appreciated by somebody, I disagree with his presentation of art and think he is just self-mutilating.
Look at the video below....
It is shocking and provocative!